Elizabeth Goldman always knew that she wanted to be a mother.

From the time she was young, she looked forward to the day that she would be able to give birth to – and hold – a newborn baby.

But when she was a teenager, Goldman received some shocking news: she was born without a uterus.

The Mobile, Alabama, native was crushed and, although she is a mother to two children, she never thought she would be able to complete the last part of family.

Thanks to a new uterus transplant program at the University of Alabama at Birmingham, Goldman, 29, is set to be the first woman in the state to receive a transplant of the organ.

She spoke to DailyMail.com about her journey and her hopes that her story will bring more awareness to women with her condition as well as inspire others to keep pursuing their dreams.

SCROLL DOWN FOR VIDEO

Elizabeth Goldman, 29, from Mobile, Alabama, is set to be the first woman in the state to undergo a uterus transplant. Pictured: Goldman with all the shots she has to take during a round of IVF in 2021 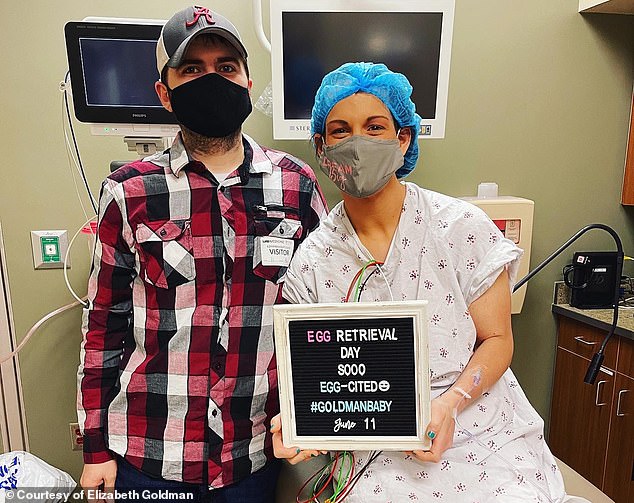 She spoke to DailyMail.com about her journey and what the dream of being able to carry a baby means to her. Pictured: Goldman with her husband Timmy during the first retrieval of eggs, June 2021

Goldman said she first learned about her condition when she was 14 years old and had not begun menstruating yet.

‘I was having some abdominal pain and I didn’t have my period yet…but I wasn’t concerned or worried about it,’ she said.

‘There were girls I was friends with who had and hadn’t gotten it yet.’

Because of the pain, her parents scheduled a doctor’s appointment, during which an ultrasound was scheduled.

It was then that Goldman received the shock of her life. She was told she had been born without a uterus.

‘Growing up, I always wanted to be a mom. So when then OBGYN told me that, it was just complete heartbreak,’ she said,

‘She told me I would never be able to carry [children}. I guess total shock really ran through me.’

Goldman was diagnosed with a condition known as Mayer-Rokitansky-Küster-Hauser (MRKH) Syndrome.

It is a rare disorder that occurs when a fetus is developing and is characterized by a uterus and vagina that is underdeveloped or nonexistent.

MRKH Syndrome affects about one in every 4,500 women at birth, according to the National Organization for Rare Disorders. 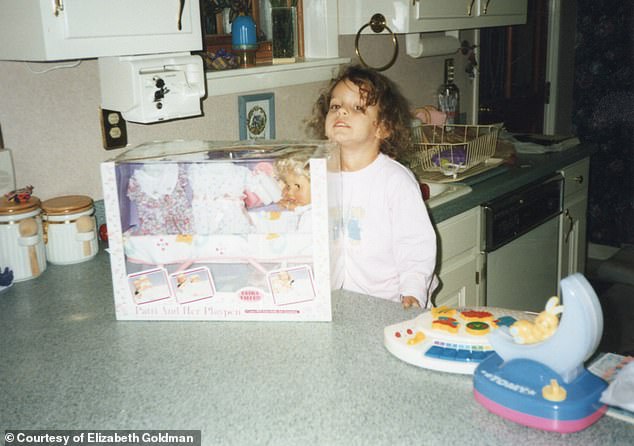 Goldman said she always wanted to be a mother from the time she was a young girl. Pictured: Goldman as a child, date unknown 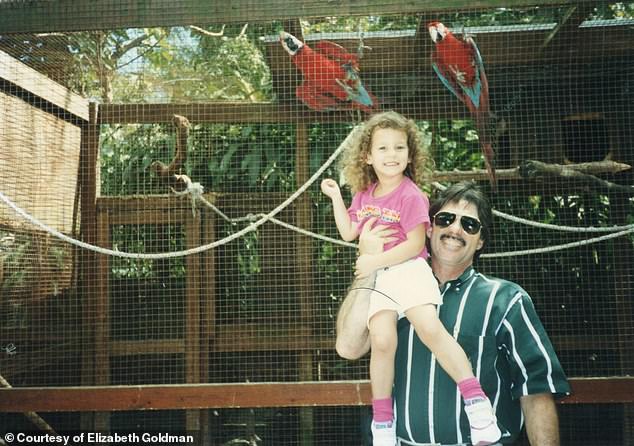 She learned when she was 14 years old that she was born without a uterus in a condition known as Mayer-Rokitansky-Küster-Hauser (MRKH) Syndrome. Pictured: Goldman with her father, date unknown

Women who are born with the condition suffer from Uterine Factor Infertility, meaning they cannot carry a baby.

Diagnosis usually occurs in adolescence, when a teenage girl hasn’t yet started her period, like Goldman.

She said that after the appointment, she met up with her dad in the waiting room

‘I couldn’t say anything,’ she said.

‘And then we got in the elevator, and then I told him. And I was probably crying the whole ride home.’

Goldman said over the next few years, the reality set in that she might never have a biological child of her own.

‘Life still goes on, but knowing you want kids in the future is hard,’ Goldman said.

‘When you’re young, you know, you have baby dolls and I always knew I was wanted a boy and a girl.

‘But now it’s like: “Okay, this Is my reality and I just gotta figure this out.’” 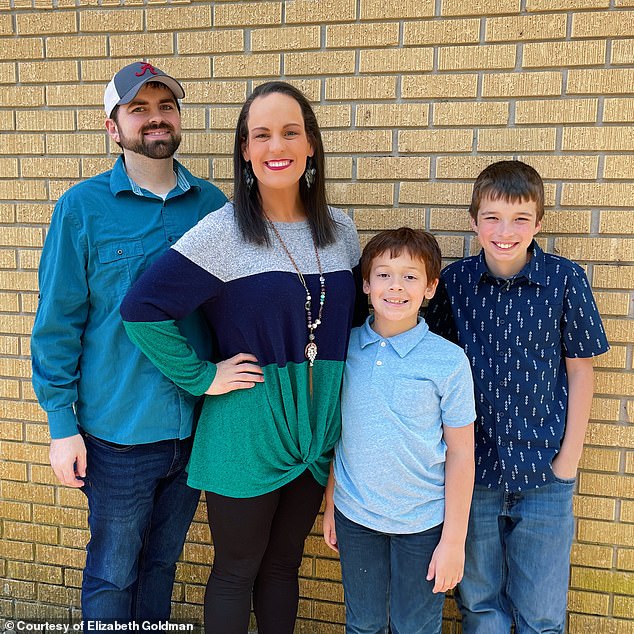 Goldman is already a mother to her nephew Jayden, 9, and her husband’s son, TJ, but has hoped for a biological child to ‘complete’ her family. Pictured (left to right): Timmy, Goldman, Jayden and TJ 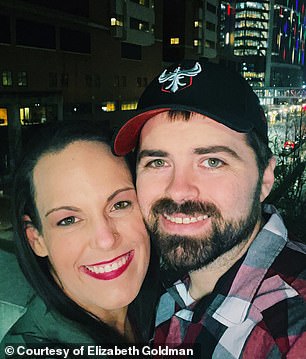 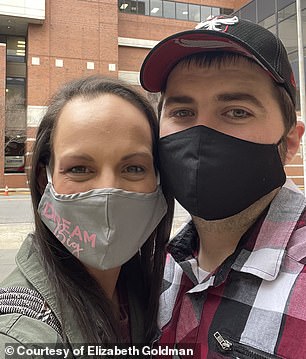 She said her husband, Timmy, 34, has been very supportive from the time she told him of her diagnosis when she met him at age 19.

And Goldman has become a mother in the time since – raising her nephew Jayden, age nine, since was he was five weeks old and being a stepmom to her husband’s 11-year-old son, TJ.

But she never stopped dreaming of being able to conceive and give birth to her own child.

Then, in 2014, Goldman heard about the first successful uterus transplant, which took place in Sweden.

She contacted the first few hospitals that were opening up uterus transplant programs: Cleveland Clinic in Ohio; Baylor Medical Center in Dallas, Texas; and Penn Medicine; and Penn Medicine in Philadelphia, Pennsylvania.

However, with each program, she would have to temporarily relocate there.

‘Just the fact that I have a stepson and we get him every other weekend,’ she said.

‘I would be splitting up our family to get the last part of our family that I want. I didn’t want to take my husband away from his son and live with that regret either.’

Then, in the fall of 2020, Goldman learned that UAB was starting a program just 250 miles away from her home in Mobile and the first of its kind in the Southeastern U.S. 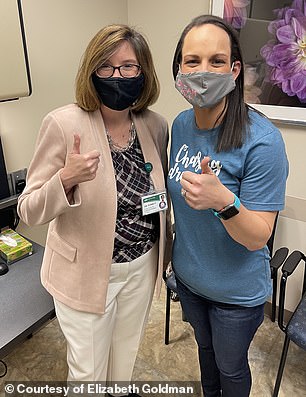 A program opened in fall 2020 at the University of Alabama at Birmingham and Goldman was the first woman to sign up. Pictured: Goldman (left) with Dr Paige Porrett of UAB’s transplant team

Goldman was the first woman to apply to the program in December 2020 and after several rounds of Zoom calls and screenings and evaluations, she was officially accepted into the program in April.

One of her doctors, Dr Paige Porrett, the director of vascularized composite allotransplantation for UAB’s Comprehensive Transplant Institute, was actually at Penn Medicine when its program started before transferring to Alabama.

An abdominal transplant surgeon by trade – mainly kidneys and livers – Porrett was skeptical when the idea of uterus transplants first began floating around.

However, she said she changed her mind after speaking with some faculty at Penn and becoming a mother herself.

‘After we had the first birth from the first transplant, I was floored for lack of a better word,’ Porrett told DailyMail.com

‘I really want to push this forward and make it more broadly accessible for patients.’ 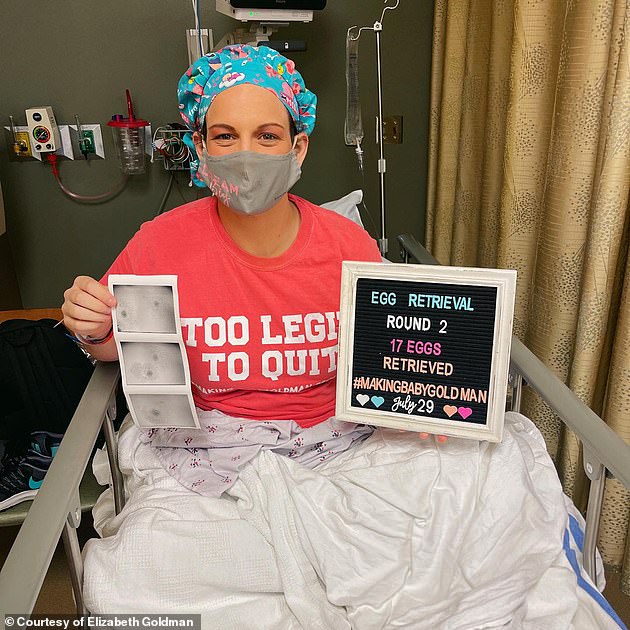 UAB is covering the cost of the procedure and anti-rejection medication Goldman will need to take, but she has to pay for IVF procedures so her eggs can be fertilized. Pictured: Goldman during a procedure to retrieve eggs, July 2021 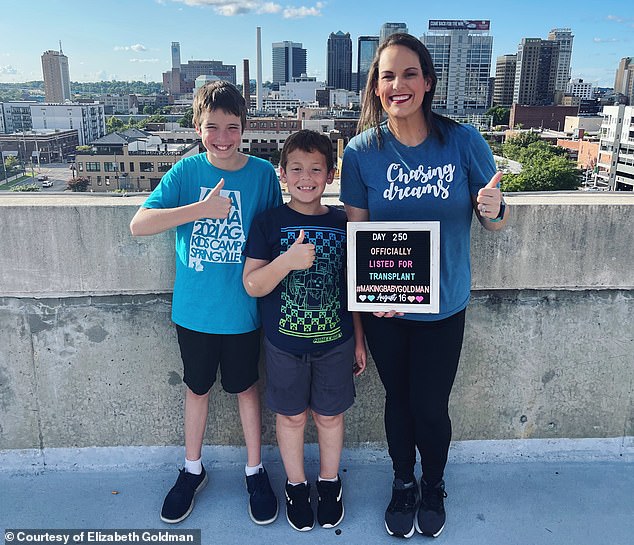 Porrett moved to Birmingham in 2020 to help set up the program at UAB and she explained that it won’t be easy road ahead for Goldman.

UAB will cover the cost of the transplant itself as well as the medication Goldman will take after the surgery to make sure her body doesn’t reject the new organ.

But she has to cover the cost of IVF procedures to retrieve eggs so they can be fertilized with sperm to create embryos.

On August 15, Goldman was listed for a transplant meaning that whenever a suitable donor that matches is found, she will get a call to immediately go in and undergo the procedure.

‘I’m now just waiting for a call that they found a match,’ she said.

‘There’s a small percent that doesn’t feel real. I am just grateful to be on this journey…but my heart races eery time my phone rings.’ 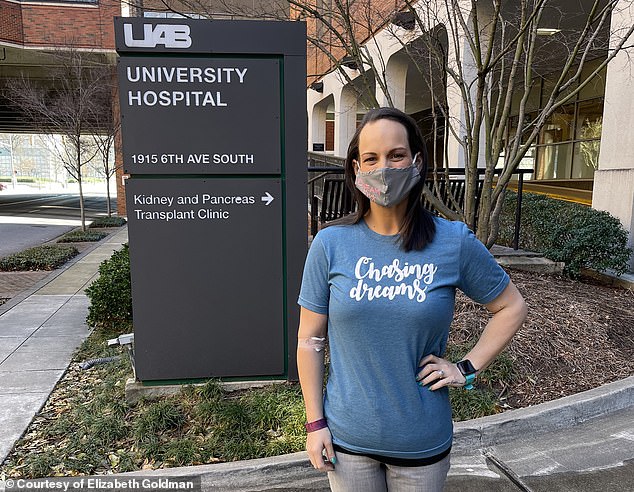 She is sharing her story in the hopes of inspiring women with her condition and to encourage others to never give up chasing their dreams. Pictured: Goldman on the second day of the uterus transplant evaluation

To the now 1,800 followers, she shares her medical history and her journey to get a uterus transplant and also raises money for the medical procedures.

Porrett says she admires Goldman’s openness in sharing her story and calls her a ‘pioneer’ to make MRKH less stigmatized.

‘Elizabeth is incredible. iI admire her very much,’ she said.

‘She is a tremendous advocate for the MRKH community. She came out with her diagnosis and told many people about her disease. She’s an advocate for women like her.’

When Goldman finally does undergo the transplant, she will be the first woman to do so in Alabama and the 33rd in the United States.

‘I just hope that I can help inspire others,’ she said.

‘If you have a dream, chase after it. Don’t give up.  Never stop chasing that dream.’

Share. Twitter Facebook Pinterest LinkedIn Tumblr Email
Previous ArticleVenezuelan socialists run the risk of losing power in the hometown of late leaders.
Next Article The next few weeks could determine the future of the jets at Cornerback.